The topic of front quadrant swimming is one that I never really understood but it seems that a little research comes up with all sorts of good info. By studying quite a few sources it is possible to finally understand what it is about.

I did realise that having the recovering arm hanging forward in front of the head helps get the legs higher.

I didn,t realise how the timing of the stroke worked. That,s what I am practising now ready for the Cottesloe Classic Mile swim in January, subject to weather conditions of course.

Thought all of us older swim bods knew about FQS. "Front Quadrant swimming" in FS ("Teaching you how to suck eggs"

IMO it's really a matter of body balance - trying to float statically on the tum with both arms by the sides - doesn't work, the legs soon sink!  But - stretch one arm out leaving the other at the side, and it becomes just possible - with both arms outstretched it becomes even easier, especially if the wrists are bent back so that the fingers break the surface (acting as a mini-counterweight, with the outstretched body as a see-saw and the centre of buoyancy as the fulcrum - so the legs will rise slowly to the surface to achieve a proper float - see my P.S. below). The aim of FQS is to get one or both arms in front of the "Centre of Buoyancy" for the major part of the stroke cycle!

The problem of the relative arrangement of the arms during a stroke cycle is clearly tied up with one's speed through the water.  If the lead arm is left extended too long (gliding

) before the rear arm is about to start it's recovery - then the flutter kick needs to fill-in the "propulsion gap".

Theoretically, to avoid water flow problems which can occur with both arms asymmetrically active simultaneously UW, one pulling and the other pushing - I reckon, for best propulsion with the arms  - the stroking lead arm should be about to start its pull, just as the rear arm starts it's recovery .  Now this is a tiring business - keeping the arms in almost continuous motion!  So IMO the best one can do practically, is to start the rear arm recovery "VERY NEAR" the time at which the lead arm starts it's pull.  It is not conducive to relaxed swimming!  I've discarded my old Maglischo tome, but seem to remember that he suggested this "more continuous arm action" was OK for the end of a race (when the swimmer is going "full-out" to reach the "touch pad" before others) but too tiring for distance swimming!  One further point that might help with timing things properly, is to make that lead arm's descent to a "catch", as gentle as possible, almost a "dropping" action under it's own weight,  which will consume a bit of time - definitely not for sprinters - probably more appropriate for those of us using an EVF or the "high elbow" style "hand/forearm" action only, down to the catch).

So this "more continuous arm action" is not FQS - and hence implies there will be some body balance problems e.g. a tendency for the legs to lie "low-ish" perhaps - but that latter problem can be overcome by the "pressing the buoy" trick, pushing the head down a bit (which includes the top of the buoyant chest), prior to an inhalation - that will raise the legs higher. It will not impede the inhalation, because there is an "upward buoyancy reaction" helping to clear the mouth above the water line.


P.S.  Circa the 1950s, the then current RLSS handbook contained a section on "Waterman-ship skills" - fun things for swimmers to do, but also having a practical purpose - later versions of the handbook omitted that section.  I remember one important "skill" the older version contained was called "Pendulum Float".  In this, the idea of keeping the fingers above the water as a "counter-weight" in changing body balance, played a very important part.  The routine needs to be done in water deeper than ones height, and starts with the swimmer floating, with arms outstretched in line with the body, on the back.  The outstretched arms are then swept back in line with the both shoulders.  This causes the legs to sink with the body becoming vertical in the water.   Next,  looking down at the bottom,  the arms are swept back into the outstretched position, and the legs rise slowly until a float on the tum is achieved.   Then, like the initial action,  the arms are swept back , in line with the shoulders and one looks upwards as the legs rise slowly to the surface, back to the initial starting attitude.  So the body swings backwards and forwards slowly - like a pendulum - as the arms, and head movement - looking up or down - dictate the body movement from vertical to horizontal.  Very good practice for floating!!!

I,ve now clocked up 20 km of sea swimming in various degrees of rough water in the last 3 weeks.

It,s given me opportunity to experiment with variations of swimming technique and the front quadrant swimming is one variation.

By FQS I really mean 3/4 Catchup and I start with a full catchup stroke and progressively start the catch a bit earlier until the catch arm and recovering arm are at a 90 deg angle.

When it is correct then the timing is such that there is no hesitation in the pulling pressure on the water. It is quite a subtle feeling and not so easy to achieve.

cottmiler wrote:...It,s given me opportunity to experiment with variations of swimming technique...[I reckon it's a very good idea to have a couple of FS variations in one's "toolkit" - it adds interest to each swim session when trying them out.]

When it is correct then the timing is such that there is no hesitation in the pulling pressure on the water.  It is quite a subtle feeling and not so easy to achieve.[Possibly due to feeling better balanced when  FQS-ing?!]

Going off-piste-yet again!   My wife - who's an exercise fanatic, normally swims a vigorous hour of FS each day of the week (and to think I was the one to teach her in very shallow water some 25 years ago!!!).  However, she is now thoroughly upset, and laid off from most exercise for probably 2 months.  She slipped, nearly 2 weeks ago, on "black ice" when riding her bike, and had a bad fall - smashing her specs, gashing her forehead and breaking her wrist (now plastered-up - much to her irritation).  They are going to do an osteo-porosis scan on her in the next few weeks (she's 76, so at that age bone-density is a concern). She is now going for long walks, in all weathers - wet or dry, in an effort to keep fit!

Each day that I swim I seem to learn something new, the latest benefitting from a more correct version of Broken Arrow drill.

However my shoulders are a bit sore from using a big Finis Freestyler paddle on one hand and a fin on the opposite foot - to excess.

I think part of the confusion over Front Quadrant Swimming is because SwimSmooth interpret it a bit differently from everyone else! Everyone else seems to say it gets its name because the two hands are in the top, front quadrant at the same time - i.e., as the recovering arm passes the head, the lead arm is still outstretched at the front. Needless to say, this is too "overglidey" for SwimSmooth's liking. They claim FQS refers to the hands being in the two front quadrants (upper and lower) at the same time. (In which case, why call it "front quadrant"? It's "front semicircle"!). According to SwimSmooth thinking, the lead arm should already be moving towards the catch as the recovering arm is passing the head; the two hands pass each other just in front of the head.

Whichever way you view FQS, it is in marked contrast to the "windmilling" style, where the stroking arm and recovering arm will pass each other more or less at shoulder level (i.e. the hands will always be in diagonally-opposite quadrants). This is the sort of classic sprinter's style exemplified by Alexander Popov.

Personally I like to swim FQS. I couldn't say for definite without video analysis, but it feels like what I do is closer to "classic" FQS than "SwimSmooth" FQS. On the breathing stroke, I don't start moving towards the catch until my face is back in the water, by which time I imagine my recovering arm is pretty much passing my head. I think the advantage of FQS is greater stability for rotation and breathing, and better front-back balance to prevent leg-sinking. When I first started FQS I used to do a 2-beat kick, but these days I do a 4-beat (in the 1/3 pattern). The extra kicks help maintain propulsion during what SwimSmooth would regard as the "overgliding" phase! I should add, I'm not an "extreme" overglider - I typically swim 60-70 strokes per minute, whereas some of the extreme overgliders SwimSmooth have dealt with have been doing 40 spm or less! 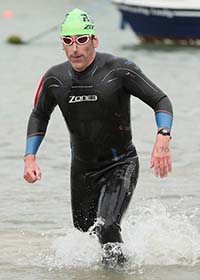