How to get Timing right for Breathing

How to get Timing right for Breathing

Forever chasing a decent stroke: swimming with the ankle band and doing various drills over single laps has built some upper body muscle but left me not knowing how to time the breathing right.

I have just tried all sorts of things this morning but not happy and have returned to find this video:

It says that you start to turn your head to breathe as the other arm enters the water!

I can hardly until my next session which could be lunchtime!

Does anyone here use this timing?

Isn't this virtually the timing that "SA" talks about in his topic "Dont move your head"  - see his embedded pic titled "PTZ Center Position" with the swimmer's lead arm outstretched having just made water entry/extended, head turned to his right to start inhaling, and rear arm just finishing it's up-sweep and almost at water exit.

Rightly or wrongly - I took the arm attitude to be exactly that which occurs when swimming with "catch-up" arm action.  Both arms, fore/aft, in a good stream-lined attitude!  I tried it out Monday for several lengths - the only difference between starting the inhalation that early, and the usual practice of inhaling on the stroking arm's up-sweep, was that I found it necessary to turn the neck a little more to clear the mouth above the water line (body roll was about the same as usual - but initiated away from the outstretched "waiting" lead arm, so as to facilitate that early inhalation.

Another point, was that I found during inhalation that my uppermost eye was looking a bit above the opposite deck level - but not naughtily too high!

I posted on the above-mentioned thread, that although had found it "workable" when using an almost full arm "catch-up" action - I wasn't sure about using it with my usual more "continuous" arm action.  However, having seen your video clip about the "right time to inhale" - I think it would be interesting to try it with that usual arm action.  The whole point of the business is to minimise any "upset" caused by inhalation when sprinting, by starting it (as in the new "catch-up" inhalation manner) when the stroking arm was not inserted deep in the water pulling or pushing - possibly causing disturbance to the water flow around the body!

Here is Chloe Sutton with advice:

It's all rather difficult.

A pity the sound track on Chloe's video was so echo-ey - I found it rather difficult to understand what she was saying -  but the bottom comments during her demos were helpful, making things clear.

It really seems as if "starting to inhale on the stroking arm's up-sweep" is going out of favour now, being replaced by starting it much earlier, when hopefully, the arms are in an approx stream-lined attitude (depending on what "arm disposition" one is using).  I noted Chloe's advice, to start turning the head towards what will be the breathing side, just as the non-breathing side recovering arm is about to make water entry (and presumably, the body is going "flat" prior to rolling away from the "soon-to-be" breathing side, in order to facilitate inhalation).  That's a bit of very early action that I hadn't tried.  It seems that the old Maglischo "Body Roll" mantra (which I formerly thought was virtually "engraved in stone"), is going to need modification to "accommodate" this early inhalation business!

On further thought - am reluctant to abandon the standard Maglischo body roll mantra - 'cos I rely on that for at least one of the FS "variants" I swim - in which I do a quick vigorous hip flick downwards at each arm's water entry (so the body is deeply rolled to that entering arm's side), leaving the relaxed legs free to wave around naturally without any explicit kicking.  So I think I will forget about this new-fangled early breathing business, and stick with the old way of doing things.  Except possibly, for swimming an "almost full arm catch-up action" in which the arms are for a moment, 180 degrees apart. With that there is no need, to adhere "slavishly" to the old mantra (and it's all much slower anyway!

It finally dawned on me last week that the action of turning to breathe was exactly that when doing Unco!

Silly Billy! (What a twit I am)

That is why Unco is such a necessary drill to master.

Having realised that, I had a nice swim this morning with correct breathing.

Read on American Masters? or something like that a couple of years ago to turn head as opposite side hand enters. Easy way to get your timing, helped me. 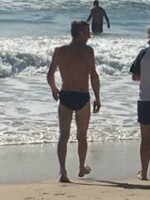